Flow allows developers to express computations on collections, similar to the Enum and Stream modules, although computations will be executed in parallel using multiple GenStages.

The canonical example of Flow, taken from the GitHub repository, demonstrates how to count words in a document in parallel:

I’ve wanted to build something using Flow since José Valim introduced the concepts behind it in his Elixir Conf 2016 keynote. I initially thought of building a product recommendation tool using crowdsourced reviews. As it would include both IO intensive stages, such as HTTP requests, and CPU intensive stages, like sentiment analysis. A good candidate for parallel processing and suitable for using Flow.

This lead me to create Start learning Elixir.

Crowdsourcing is used to locate and rank relevant learning materials, including books, eBooks, screencasts, and tutorials.

The ranking algorithm uses a combination of popularity and sentiment analysis. Popular and highly rated material scores well. Scores are a combination of the positive, neutral, and negative mentions from the popular Elixir Forum.

Flow is used in the indexer app; that’s where the processing is done. I jotted down the high-level steps, then built separate modules for each stage of the pipeline. Each stage was built and unit tested in isolation. Then connected together and orchestrated using the appropriate Flow function.

The following end-to-end process is used to build the product recommendations:

This translates to the following Elixir code using Flow.

You will notice the additional Flow.partition functions included within certain stages of the pipeline. Partitioning ensures that data is mapped to the same process to minimise message passing. A hash function is used to partition the data. You can provide a function, or key tuple, to partition by. This is also necessary when you need to aggregate and reduce data. The partitioning guarantees the data in each partition won’t overlap.

The individual steps within the Flow pipeline are detailed below:

Elixir Forum uses Discourse as its forum platform. This provides a public API that serves up JSON. You simply append .json to the request to receive JSON encoded data.

To be a well behaved HTTP crawler, my access to the site is rate limited using ExRated. This was configured to only allow 1 request every second. This limit applies to all requests through this module, regardless of calling process, as ExRated runs as GenServer with its own state.

Responses were cached to disk, so repeated requests would not hit the website.

The HTTP cache module was configured in the application supervisor.

For testing the search, I again used ExVCR to record the HTTP request/response and replay from disk for subsequent test runs.

Each <p> tag is used to identify paragraphs of text, and the text content extracted using Floki.text/1.

Given a post containing paragraphs of text, I extract the individual sentences. This uses the Essence.Chunker.sentences function from the essence Natural Language Processing library.

I use Sentient for simple sentiment analysis. It uses the AFINN-111 wordlist to score a sentence as positive, neutral, or negative based upon the presence, and score, of any words from the list.

As an example, the text “I recommend Elixir in Action” is scored positive as the word “recommend” is rated +2. There are 2,477 words in the AFINN-111 word list. This simplistic algorithm provides a reasonable indicator of sentiment for a sentence.

The sentiment score of the sentence containing a product mention contributes to its overall score.

I determine a product’s overall score once every mention has been extracted from the text and assigned a sentiment score.

To balance the proportion of positive/negative ratings with the uncertainty from only finding a small number of mentions I apply Laplace smoothing:

Each product has a mix of positive, neutral, and negative mentions. So I assign each neutral mention as +1, and positive mention as +2 to calculate the score.

There’s research to back up the usage of Laplace smoothing to “.. provide a well justified solution to the problem of user-rating based ranking of items in web applications”.

Composing the individual steps into the single pipeline using Flow shown earlier, I can rank each product by its recommendations.

These are persisted into a PostgreSQL database using Ecto. I use the following Ecto query to display the products, ranked by their score. They may be optionally filtered by programming language or experience level to provide the categorised lists show on the website.

That’s a real-world example of using Flow to build a computational parallel pipeline. I had assumed that the simplistic approach to building product recommendations wouldn’t be valuable. Yet, looking at the final recommendations I believe does: popular and highly rated resources appear at the top of the lists. Popularity, from mentions on a forum of users, combined with sentiment can be used to rate a product.

I’ve recently added activity tracking to the site with the intention of including those analytics in scores. So more frequently viewed resources are more highly ranked. I am also considering adding a feedback mechanism for users to flag incorrect reviews and add their own.

Get in touch if you have any feedback and suggestions.

I was inspired to look at tuning my Flow pipeline by Tymon Tobolski. He authored two excellent articles on the subject.

By taking his example Progress module and GnuPlot script I was able to visualise and optimise the Flow pipeline.

I used Arjan Scherpenisse’s decorator library to apply the progress collecting stats to each stage function. By decorating each function to be recorded with @decorate progress.

After running the indexer with the stage functions decorated with the @progress tag I could plot the flow progress over time.

Initially it took around 33 seconds to run the flow. This is with a fully populated HTTP cache, so no external requests were being made. 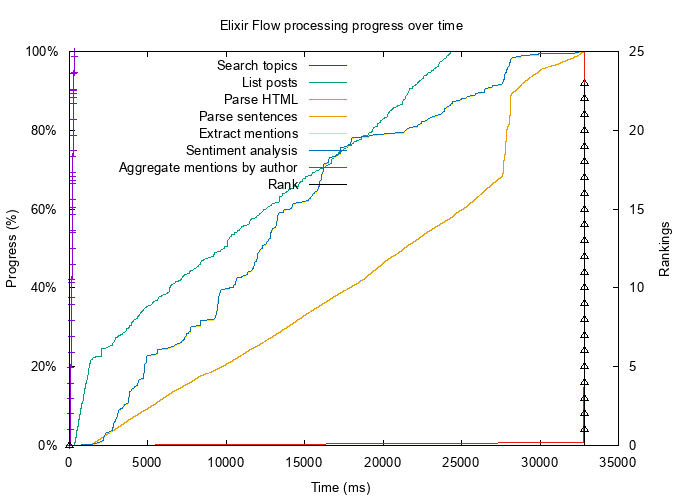 I adjusted the max_demand and stages options for some of the Flow steps, as shown above. This reduced the running time of the overall flow down from 33 to 26 seconds. 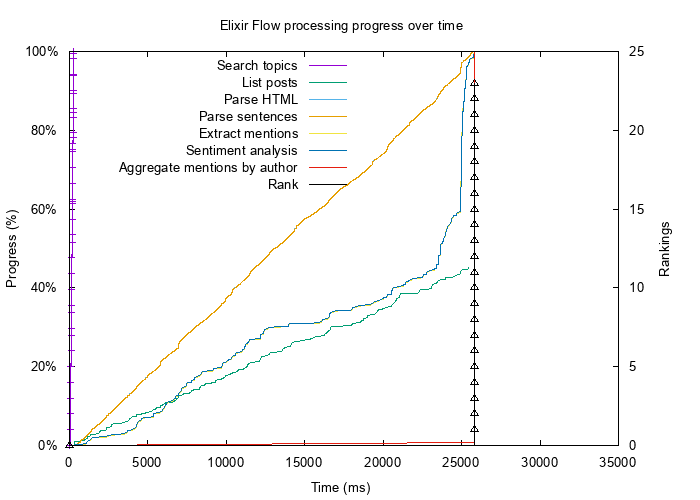 The following GnuPlot script was used to generate the charts. It displays the progress of each stage by percentage complete. The final ranked recommendations are shown on a separate y-axis.

Articles published by Binary Consulting are written by Ben Smith

Send an email to Ben if you'd like to get in touch.